Most frequent questions and answers

Origin of oil palm
the Oil Palm (Elaeis guineensis) originated in the tropical rain forest region of West Africa. The main belt runs through the southern latitudes of Cameroon, Côte d’Ivoire, Ghana, Liberia, Nigeria, Sierra Leone, Togo and into the equatorial region of Angola and the Congo. Processing oil palm fruits for edible oil has been practiced in Africa for thousands of years, and the oil produced, highly coloured and flavoured, is an essential ingredient in much of the traditional West African cuisine. The traditional process is simple, but tedious and inefficient. During the 14th to 17th centuries some palm fruits were taken to the Americas and from there to the Far East. The plant appears to have thrived better in the Far East, thus providing the largest commercial production of an economic crop far removed from its centre of origin. Palm oil is rich in carotenoids, (pigments found in plants and animals) from which it derives its deep red colour, and the major component of its glycerides is the saturated fatty acid palmitic; hence it is a viscous semi-solid, even at tropical ambients, and a solid fat in temperate climates. Because of its economic importance as an high-yielding source of edible and technical oils, the oil palm is now grown as a plantation crop in most countries with high rainfall (minimum 1 600 mm/yr) in tropical climates within 10° of the equator. The palm bears its fruit in bunches (Fig.1) varying in weight from 10 to 40 kg. The individual fruit, (Fig. 2) ranging from 6 to 20 gm, are made up of an outer skin (the exocarp), a pulp (mesocarp) containing the palm oil in a fibrous matrix; a central nut consisting of a shell (endocarp); and the kernel, which itself contains an oil, quite different to palm oil, resembling coconut oil.

Diagram 1: Structure of the palm fruit 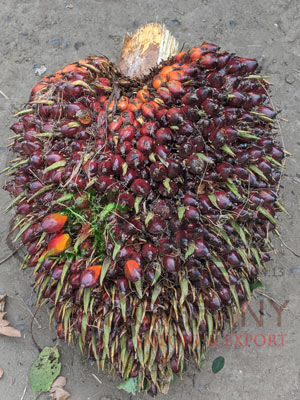 Fig. 2 Fresh fruit (on the left is a cut fruit) 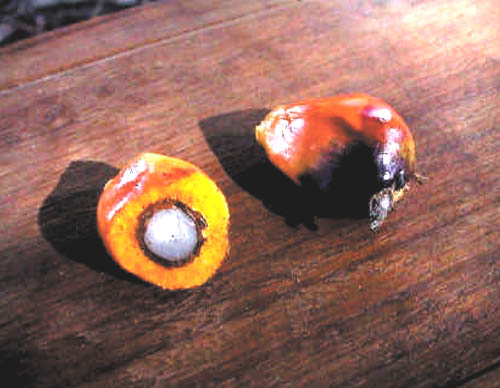 The wild oil palm groves of Central and West Africa consists mainly of a thick-shelled variety with a thin mesocarp, called Dura. Breeding work, particularly crosses between Dura and a shell-less variety (Pisifera), have led to the development of a hybrid with a much thicker mesocarp and a thinner shell, termed Tenera. All breeding and planting programs now use this latter type, the fruits of which have a much higher content of palm oil than the native Dura. The extensive development of oil palm industries in many countries in the tropics has been motivated by its extremely high potential productivity. The oil palm gives the highest yield of oil per unit area compared to any other crop and produces two distinct oils – palm oil and palm kernel oil – both of which are important in world trade. Modern high-yielding varieties developed by breeding programs, under ideal climatic conditions and good management, are capable of producing in excess of 20 tonnes of bunches/ha/yr, with palm oil in bunch content of 25 percent. This is equivalent to a yield of 5 tonnes oil/ha/yr (excluding the palm kernel oil), which far outstrips any other source of edible oil.

However, such high yields are rarely achieved in practice because climatic conditions are usually less than ideal. Rainfall is erratic in Central and West Africa and hence the tree suffer water-related stresses. The management of costly inputs of labour, imported fertilizers, pesticides and harvesting machinery, is also a difficulty that hampers the yield of plantations.
What is the palm oil farm systems in Guinea?

The primary unit of production of the palm oil industry is the farm where the oil palm tree is cultivated to produce palm fruits. There are also wild groves of oil palm. The farm units are of different sizes and may be classified as small, medium, and large-scale estates.

The wild groves, as the name implies, grow untended in the forest. They are found in clusters and are mainly the result of natural seed dispersal. DURA, the main variety found in the groves, for decades has been the source of palm oil – well before modern methods of oil palm cultivation were introduced to Africa in the second quarter of the 20th century.

And DURA is the Red palm oil, we are trying to market, as we believe is the purest form of Red Palm Oil you’ll ever taste.

are there different types of palm oils?

Yes! The varieties of palm oil are Dura, Pisifera and Tenera.

The Dura has a large nut with a thick shell and thin mesocarp.

The Pisifera is a small fruit with no shell. By crossing the Dura with Pisifera a fruit is obtained with a thick mesocarp containing much more oil and fat (chemically saturated oil) than either of its parents.

The Tenera nut is small and is easily shelled to release the palm kernel. The Tenera palm kernel is smaller than the Dura kernel although the Tenera bunch is much larger than Dura. The Tenera is a much better variety for industrial and economic purposes, but not good for consumption because of the high cholesterol meaning it is too fatty.

Traditional farmers in Guinea have not embraced the Tenera because consumers complained that the palm oil produced from the variety was too fatty. This means that when the oil cools to ambient temperature it ‘goes to sleep’ or solidifies instead of remaining fluid and red. The oil did not have the right taste as oil or as a soup base.

Dura palm oil is derived from native palm trees, which grows untended in the forest, these trees does not cause any dangers to monkeys, orangutans, as they are very tall. Because of how tall these palm trees are, some farmers no longer have the strength to cultivate the groves. Dura palm trees also take a while to produce the wild groves, which make farmers grow inpatient, thus making way for native trees being cut down to make way for short palm trees (Tenera). Oil palm expansion is a major driver of deforestation, which in turn threatens wildlife, such as the critically endangered orangutans, and primate species in West Africa.

Many companies growing palm oil are looking to expand into Africa.

This is a worry for Sophie Anne Company, as potential plantation sites are in areas of rich biodiversity.

Consumers can also help by choosing products that use sustainable palm oil and cutting down on the amount of palm oil they buy.